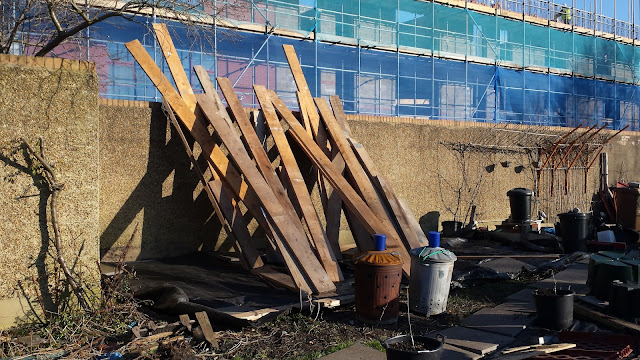 Builder behind my plot asked, "Would you like some timber joists to use for your raised beds?" I was around there like a flash and only had to put them over the wall. All nicely stacked up and ready to cut to size now. 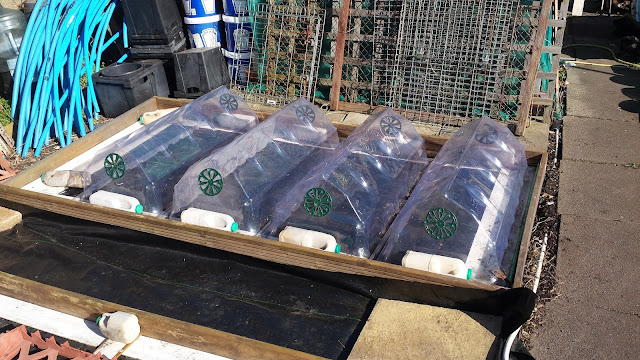 I know we are supposed to be getting 8" or 200mm of snow this week but I thought I better start warming the beds up a bit so I dug out the solar tents and then went about filling 8 milk bottles of sand to hold them in place against the wind. The path between the beds has membrane in place and a slab either end, I just need to lift the slab on the main path and tuck it under before the woodchip goes in when it comes. 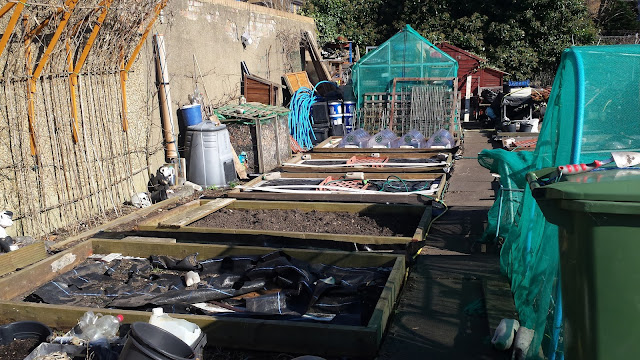 The frames to beds 2 &3 have now been screwed together and the weed membrane between beds 2&3 and 3&4 has been laid and a paving slab placed at either end waiting for the next delivery of woodchips. I need to find a couple of membrane sheets cut to bed size but for the moment I'm leaving be 3 open to the elements. 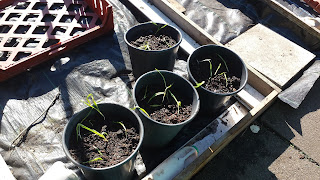 Gerry the kind gent who sent me the Walnut Trees also sent me some Babington Leeks your supposed to plant them about 200mm apart but for the moment I have them in flower buckets filled of my grade 1 home made compost. I should be able to collect the bulbils about July/Aug and plant some for next year.  Dig up the cloves in Autumn and leave a few to produce leeks in late winter.

Here is what I have found out about them, apart from they are very much like Catawissa Walking Onions with the bulbil at the top

Babington leeks, Allium Ampeloprasum var Babingtonii, is one of the tastiest and easy to grow perennial vegetables. Named after Charles Cardale Babington, this wild and hardy perennial leek is a native sea shore plant and perennial ancestor to garden leeks. It is extremely low maintenance and ideal for polyculture spaces as it will thrive between other plants and can tolerate a range of soils and positions.

When your bulbils arrive you can sow direct about 8cm deep allowing 8-10cm space between each bulbil. Alternatively you can sow the bulbils in a roomy pot and just leave outside, when tips emerge, you can carefully separate out the sprouted bulbils and plant them as above. They will remain dormant until late Autumn/early winter, when you should see the first growing tips emerge.
How to Harvest


Mark where you have planted them so you can look out for growth appearing. The first appearance of Babington leek shoots can vary depending on your local climate and region with first shoots as early as October right through to December/January.
How to Propagate New Plants

Babington leeks are so tasty that you will want to harvest them all, but if you want to increase your stock quickly you need to let some of them flower. The leeks will throw up a very tall stem around July time with very attractive purple flowers. These in turn go on to produce a head of bulbils, each bulbil producing a new leek. The head will naturally bend and plant itself or you can gather bulbils and separate them when the cases are papery and sow in a new spot. As the plants mature, they produce a very large underground bulb with a cluster of ‘mini bulbs’ or offsets which will form clumps of new growth above ground. You can lift and separate and move bulbs around when they are in their dormant stage. You will find leeks popping up in strange places as bulbils sometimes get flung a distance, but it is exciting when that happens! It takes patience to establish a Babington colony, but well worth it and you will have them forever. The life cycle of the leeks is: Emerge in late Autumn/early winter, harvesting period March to June, flowers emerge July to August ( from plants that have not been cut for harvesting), Bulbils can be collected in August, plants die back by end of September. As each year passes the underground bulbs become larger. Timing of growth/flowering cycle may vary according to your location and temperature.

Babington Leeks – flowers, stems, bulbs and bulbils are all edible. The leeks have a deep savoury taste and make the most delicious base for soups, are great in omelettes, or just simply sautéed in a pan. They have a garlicky hit too which just adds to their many culinary uses.
I also managed to clear a little more of the area behind the shed and have installed a couple or polycarbonate sheets on the gap to create a dry storage area.

Next visit to take down the sprout cage from bed 12 and install on bed 2, and cover Bed 7 & 8 with glass panels to warm the beds up.
Posted by cadalot at 15:55