Sowing and Potting On 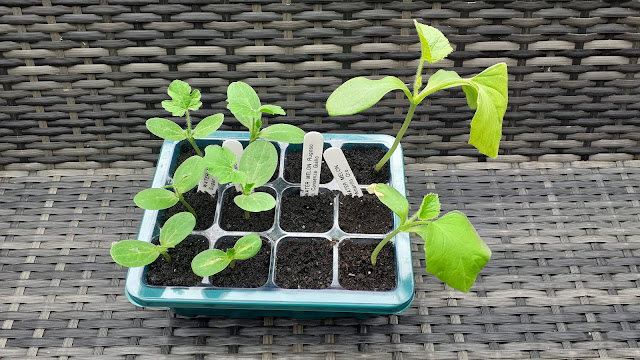 Melons sown on the 15th March 2020. I think those Amarilli Oro Melons on the right need potting on! The Sugar Baby on the left are catching up but the Rugoso di Consenza Giallo seeds from Suttons have not germinated at all, which is a little disappointing to be honest. 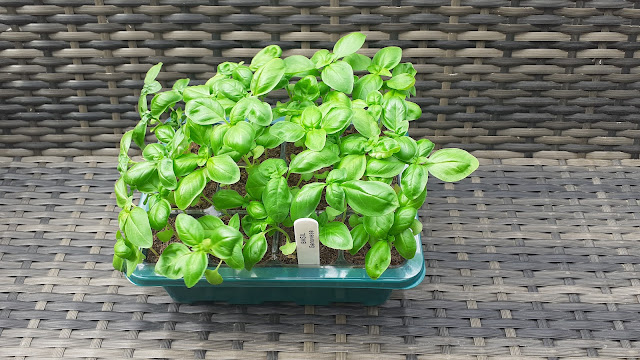 The Joe Mills Grow With Me 2022 - Ganovese Basil was sown on the 15th March and from the looks as if it can also do with potting on. 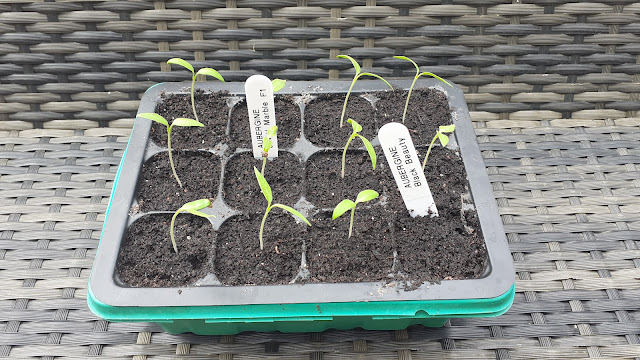 On the 25th March I sowed all 11 Seeds as that's what was in the packet - Aubergine Jewel Marble F1 - Mr Fothergill's that was supposed to contain 10 Seeds. I put a Black Beauty in the corner cell, but I'm still waiting for it to show its head. These were the first Aubergines to germinate and show from the three varieties I sowed that day. 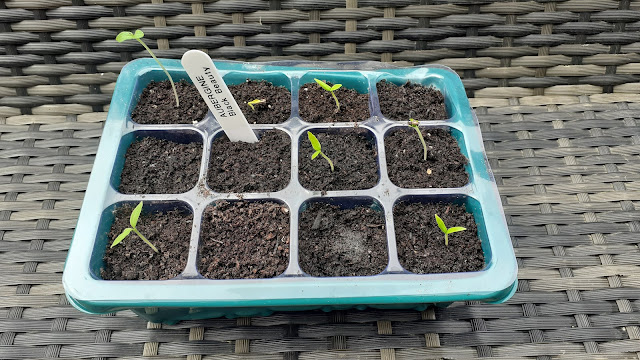 Of the 13 Black Beauty from Seed Parade also sown on the 25th March so far 7 are above the soil.

Only one of the 12  Aubergine Long Purple - Kings Seeds that came with a copy of Kitchen Garden also sown on the 25th March is just breaking the surface of the cell.

With sub zero temperatures and frost last week and overnight lows of 1 - 3C forecast which could still drop lower, my babies above will be staying in the house and not going out to the unheated Space Saver Greenhouse just yet a while.

Now this does cause a little problem because I can only get away with having so much in doors before it will become a bone of contention with my good lady and daughter.

Beetroots can be sown outdoors under cloche in April, so on that basis I have started some off in modules that will go into the Unheated Space Saver Greenhouse. Today so far has been dry 13C but very windy I filled one of the 40 cell CHM Ltd or Containerwise HD Plastic modules with a mixture or Golden Eye and Rainbow beetroots, and then sowed another tray of wilko Cylindra Beetroot seeds. It  was very windy and the wind took the potting tray whist I was taking the tray of beetroots to the greenhouse, so I now have beetroot seeds over the lawn! 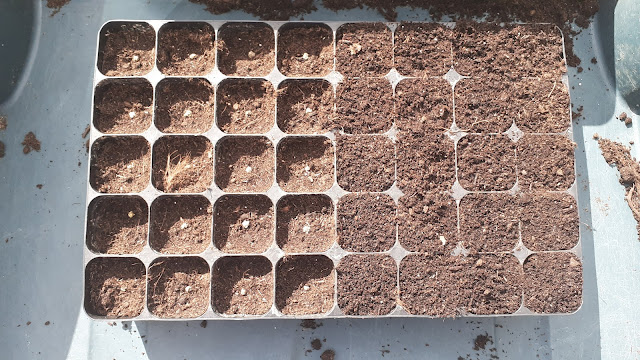 Last year I did the Charles Dowding multi-sow approach thing, but think sowing with mates didn't really work out very well for me, so have gone back to one seed per module cell. I will be planting and direct sowing into one of my 105 hole planting membrane and trying to sow in succession a third of a bed at a time in order to not have to process all the beetroots in one go as it can get a bit daunting and time consuming to pickle that amount of beetroots in one hit. 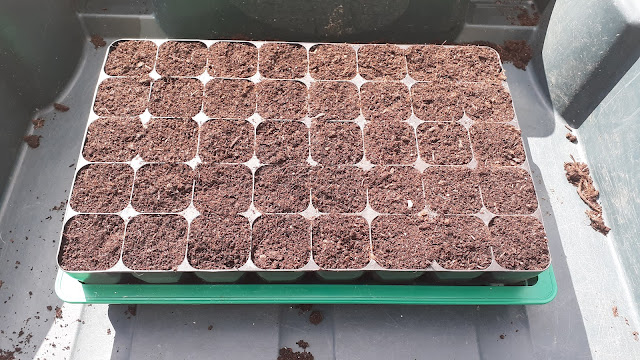 The cells were filled with un-sieved Clover compost and a sieved fine layer of Clover was put over the seeds in the cells. They were watered with water that had been standing for a few days and was not cold and then placed in the Space Saver greenhouse with a propagator lid placed over them. I will look in a few days to see how they are doing. 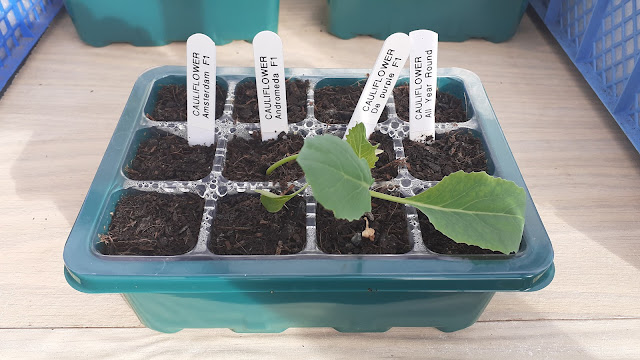 The Cauliflowers got hit when we had the spring heat wave a few weeks ago and only one Andromeda remains so I decided as it survived to sow a new tray with all the 11 seeds that were left in the pack. 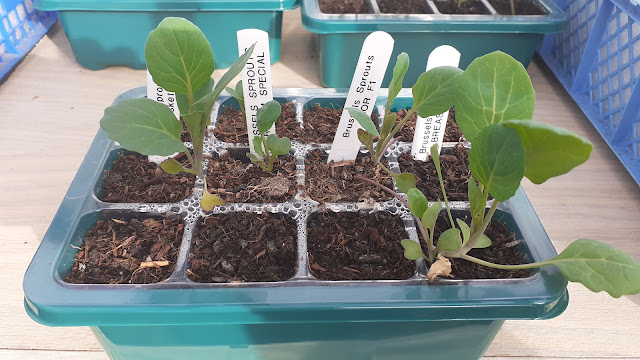 Again during the hot spell a few weeks ago many of the Brussels Sprouts turned their toes up so I have sown a tray of 12 Brodie F1. I need to keep an eye on the greenhouse temperatures and remove the Brassicas as the heat increases in there during the day, as at 9am on a sunny day this time of year the temperature will already be between 20C - 22C. 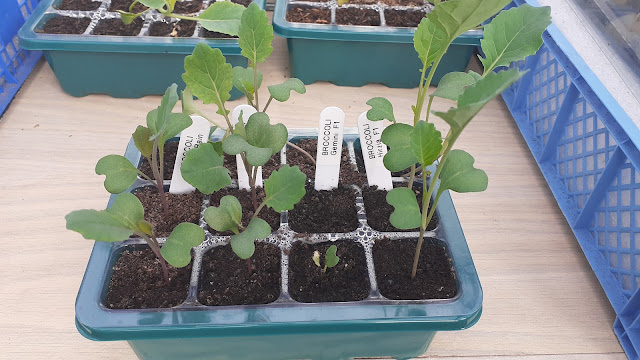 Broccoli didn't get hit as bad as the sprouts and Cauliflower 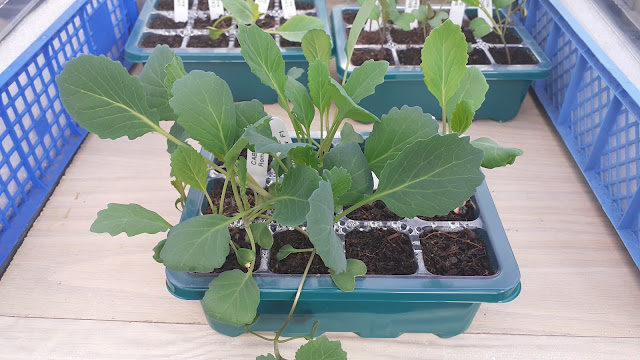 The Cabbage also didn't get it as bad, once I have potted on the Cabbage & Broccoli into vending machine cups I will sow some more of each. 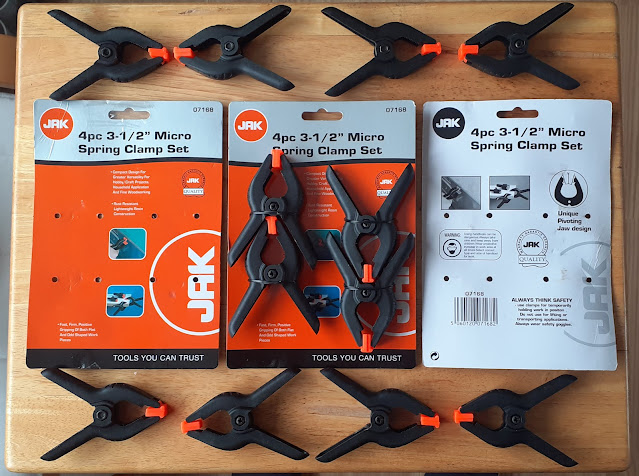 I've purchased some more of these spring clips as they are so useful for fixing the debris netting to the blue water pipe hoops. With more fox activity I will be netting up more vegetables this year than normal, as I have the additional beds on plot 1 now to play with. Plus the two Square Foot Gardening bed not using weed membrane need to be netted to keep Basil and his mates at bay.