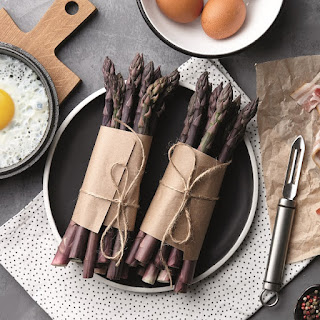 I have 5 asparagus crowns on the way from Suttons, the first variety is called "Burgundine" which is a new variety that is less fibrous Iingin than most varieties, so can be enjoyed raw or lightly steamed!

(Lingin is a complex organic polymer deposited in the cell walls of many plants, making them rigid and woody.)

The purple stems are extremely attractive in the garden and on the plate and after we eat with our eyes first!

The Press Release for this variety promised a reliable harvest of spears each year.

They are due the end of March first week of April and cost. 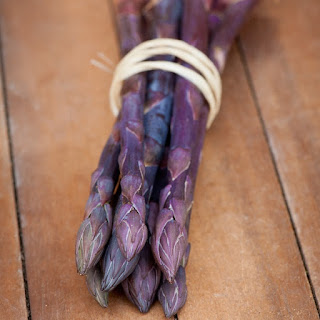 I also have another 5 crowns on the way from Suttons called ‘Pacific Purple’ which is a  colourful spring planting variety, and produces stringless spears, which are more tender and sweeter than many green varieties.
The purple colour can be lost if over cooked, so the pretty spears are best steamed or eaten raw. so the press release says, personally I have never eaten raw asparagus.
This high yielding asparagus will also produce white spears if earthed up.
Original Press Release said Dispatched by the end of March, still waiting
At the time of this article there appears to be huge discounted prices on this variety  however, what appear to have happened is that RRP have been inflated to make the offers look better than they really are.
At the press release for these back in November last year the prices were quoted as being.
KC2200   5 x Crowns £12.99
KC2201 10 x Crowns £19.99
KC2202 25 x Crowns £39.99
Prices Quoted today
KC2200   5 x Crowns £12.99 £12.39 save 4%
KC2201 10 x Crowns £25.98 £17.49 save 32%
KC2202 25 x Crowns £64.95 £41.19 save 36%
It's quite a hike in the RRP to justify savings of 32% & 36% or it could just be an inept web master? 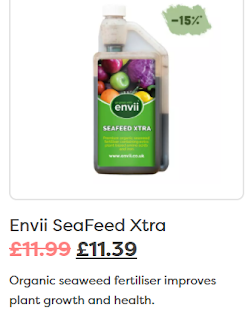 Here is a nice little video I found from Thompson & Morgan as there was nothing on the Suttons web site about how to prep the ground for planting asparagus.

How to grow asparagus / RHS Gardening

Buying, planting and care of asparagus in the UK (gardenfocused.co.uk)

Extract from the garden focused article below

The ideal time to plant new asparagus is the first week of April. We don't recommend planting them in autumn (although they are also sold at that time of year) because the young crowns are more likely to suffer from water logging. In addition, the crowns sold in autumn will not yet have gone into dormancy reducing your chances of success. Follow these steps: 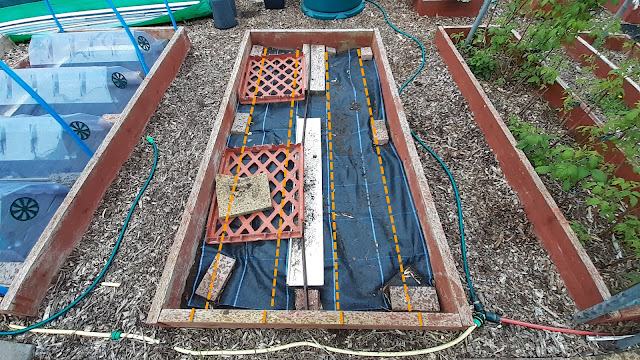 I did pop down to the allotment to clear the timber off the bed that I'm going to use for the asparagus and chalk marked the frame with three 300mm (12") wide lines where the trenches need to be dug and the farmyard manure put in.
One guide says dig 250mm deep and put in 75mm of manure and the other sad dig 200mm deep and put in 50mm of manure. The garden focused article talks about leaving 600mm for the asparagus to spread but also says rows should be 450 mm / 18in apart so if that' s the case shouldn't the gaps between rows be greater?
In the end with 1.2m x 2.4m beds I have decided to put the trenches in as the photo above and have 300 - 600 - 300 between bed frame and rows. Reading about staggering the crowns in rows I have decided to lay them out like this. 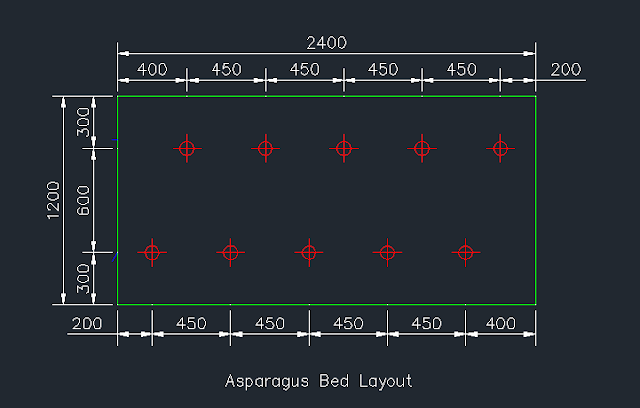 Asparagus an easy maintenance vegetable to grow and require very little attention throughout the year. The key tasks are:

Asparagus are shallow rooted plants so they will need to be watered occasionally when conditions are unusually dry. As with most vegetables, a thorough drenching with water once is better than several. Feed once a year with a long lasting fertiliser such as blood, fish and bone. One good handful per plant should be sufficient.

Regular weeding will need to be carried out to stop the weeds taking moisture and nutrients from the soil. It's best to weed often because hoeing is not really an option, it will probably damage the asparagus roots which grow near the surface.

Mulch once a year in autumn with well rotted compost or similar material. This will not only insulate the crowns from the worst of the winter weather but will also suppress many of the weeds and conserve water in the summer.

When the foliage turns yellow in autumn cut it down to 5cm / 2in above ground level. If you don't prune in autumn the stronger winter winds may well pull some of the roots out of the ground and damage the crowns. Don't prune before the foliage is yellow, green foliage will still be absorbing energy and storing it in the roots.

WHEN AND HOW TO HARVEST ASPARAGUS

Asparagus tips should be harvested when they are about 15cm / 6in tall. If you let them grow larger than this much of the tenderness and flavour will lost. As a rough guide, harvesting can normally begin in mid April onwards but let the appearance and size of the spears be your guide.

When an established asparagus bed starts to produce a crop you need to check it and harvest every two days because the spears grow so quickly, 5cm / 2in a day is not unusual.

Stop harvesting in the last week of May and allow the remaining spears to grow tall and produce energy absorbing foliage. Do not harvest asparagus plants in their first year of life and only harvest four spears per plant in the second year. After that, harvest as described above.

To harvest, take a sharp knife and cut the spears off about 3cm / 1in below the soil surface. Asparagus is like sweetcorn, the minute it is harvested it begins to loose sweetness. For the sweetest and tastiest spears, cook and eat immediately after harvesting. If that's not possible store in the fridge or freeze.

For most, asparagus are very healthy plants but slugs, asparagus beetle and occasionally moles do cause problems.

SLUGS - Asparagus are not their first choice but the tips of the spears can sometimes be eaten. Use your favourite slug repellent / trap to solve the problem.

ASPARAGUS BEETLE - Immediately recognisable, these are black and white on their back, with orange on the lower sides and near the head. They are 6mm to 7mm long so are readily visible. In spring when the young shoots begin to appear the beetles lay their eggs (light brown and long-oval shaped) on the spears (remove the eggs by hand as well) which feed on the young spears. Several generations can occur each year and the adults feed on the foliage as well as the spears.

The first course of action is to pick off any you see, in most cases this will get rid of them. The adults are most active in the afternoon.

Clear up the foliage at the end of the season and remove any other leaves and debris around the plants at the same time. The beetles hibernate in debris around the plant. If that doesn't work, spray with a pesticide containing pyrethrum which should be applied just as the spears appear above ground and up to 6 weeks after that. 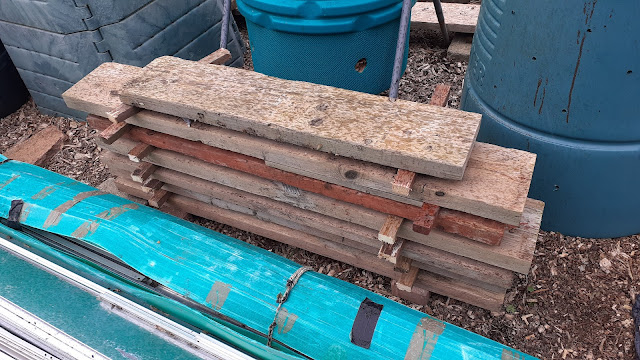 Timber that was on the bed, finally stacked properly to allow air flow, and yes that is rain on it, and I dashed to the greenhouse to get out of the rain and do some tidying and emptying of the water in the quadgrows into the Comfrey Water Butt.
Posted by cadalot at 06:00