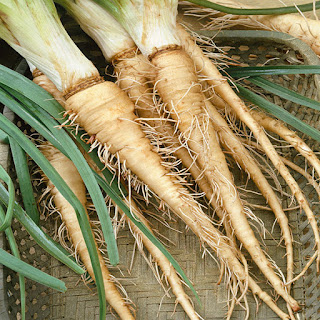 Another one of those seed pack varieties that come free on the cover of Kitchen Garden that I have never tasted before. I had the seeds and and tried growing in 2021. Only 3 grew and they looked nothing like the photo left.

Salsify - Sandwich Island - 75 Seeds - Free on Kitchen Garden Magazine.
The pack on the Kings Seeds web site cost £1.30 for 150 Seeds, on the magazine pack the contents are 75 Seeds and the RRP is stated as being £1.40 so cost more for less seeds, of just made to look more of a bargain than it really is.
Posted by cadalot at 06:00

Email ThisBlogThis!Share to TwitterShare to FacebookShare to Pinterest
Labels: In My Seed Box, Salsify