The plan in my head was a dual visit to Plot 1A and 23B in the morning, but the reality was there was too much to do on Plot 1A to allow me to get to 23B. It had rained yesterday and the grass paths and the mud was wet on arrival. 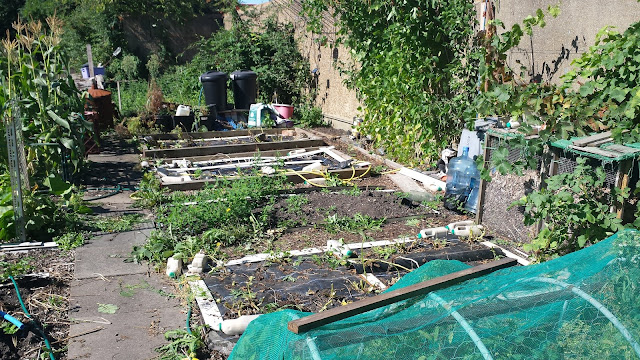 The Photo above is of beds 1 - 4 after the cutting back of all the potato foliage on beds 1 and 4 that was on the way down and had completely covered the paths. I have started de weeding the woodchip paths as well. Because of the restricted access this year Mill Green is not as under control as previous years.

Bed 10 the Butternut squash has finally started to explore the rest of the plot and I spied four little squash plants which hopefully will have time to mature because they are so late in coming. Shows what growing on a bed of manure on Plot 23B did for the little beauties as there I've had one massive and five good sized squashes already and there are four more coming of a similar size to the ones here.

I harvested the few red tomatoes from the extension to the little shed on the allotment, and what looks could be the last of the Scarlet Emperor Runner beans. 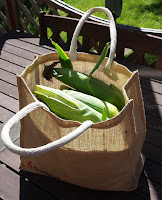 I checked the sweetcorn and got milk when I pressed my nail into one of the cobs, so as I have lost sweetcorn to rodents and birds in the past I harvested all the primary and large cobs that filled my hessian shopping bag courtesy of a NatWest promotion.

Once home I didn't much around they were skinned and I must say the Swift clean up and the foliage and the tassels come off a lot easier than the Lark that I normally grow. In some respects its a shame I have already ordered Lark for next years crop, saying that I have not tasted them yet 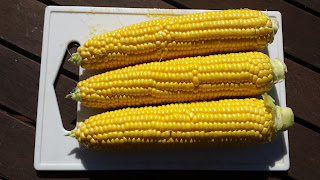 As we are having a mini heatwave I will leave the rest of the secondary cobs for harvesting next weekend as I know I have space for them in the allotment produce freezer in the shed.

The Kiwano Cucumbers have taken over the climbing frame and started to explore the rest of the allotment, however there is one fundamental problem. These is not one single cucumber on the plant, anywhere so it looks like I have just grown compost, I was so looking forward to tasting them it's untrue.    So by now you are wondering about the rat. Well unlike UB40's hit it was not in the kitchen but dead and on the path covered in bluebottles on the allotment. It got scooped up on a spade and taken to the overgrown area and deposited. I'm guessing the foxes got it but don't really want a meal.
Soft Bricks were made with sand dried in the greenhouse from soft bricks that are now three years old and the plastic that the milk bottles are made of has become brittle and fractured. I left the allotment about an hour earlier than usual as an early lunch was in order as Kelly was on an early afternoon shift.

Later in the afternoon I visited my eldest daughter who had cut her grass and had a sack load for me for the compost bin and that was taken to Plot 23B and added with the husks of the cobs with a separating layer of manure and sawdust all watered in as loaded.

A few more F2 Crimson Crush were harvested and I will definitely be saving F3 seeds and growing them again next year. The only difference is that I will be making a wigwam frame around them as they definitely need a lot of support.
Posted by cadalot at 09:23