After six months of waiting for idverde to stop sitting on their hands with their thumbs up their arse, I had an appointment to meet the first of three people "Brad" wanting to see the vacant plots on the site at 10:30 Today. The time of meeting gave me enough time to get my wife up, washed & dressed, medicated and settled before I left for the allotment.

At the moment our site is like the Goldilocks and the Three Bears as we have a large plot and medilum plot and a baby plot up for grabs. Brad thought he might like the Baby plot but once chatting about what kind of Allotmenteer he may be, either an organised bed and path or a bear bones dig it all up every year and have no infrastructure, then we talked about Daleks and composting, incinerator for burning, crop rotation, and a little shed for tools etc. he soon decided that the medium plot no 4 would be better for him. An introduction to Wally his plot neighbour who we included in the discussion and Wally also pointed him towards plot 4 as the better option to the tiny plot 11.

I look forward to showing the empty plots and letting prospective plot holders know a little bit about how much works involved in getting a plot ready and keeping it as weed free as possible. You can normally guess which ones will make a go of it and which ones will lose interest within the first three months. 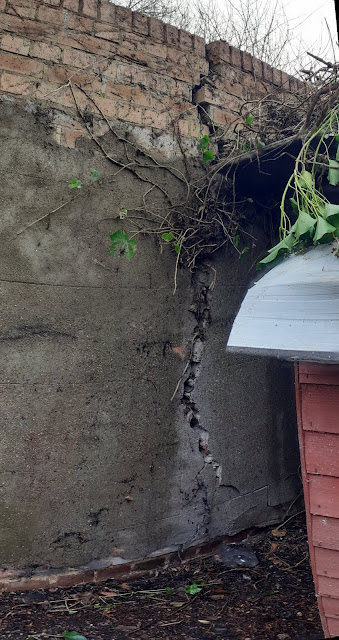 So with Brad departed I set about clearing up the storage area where all the collapsed material and debris from the tree removal had fallen. In the photo above you can see where I had stacked a number of polycarbonate sheets against the wall over what was in 2013 a minimal crack and has now opened and the wall has started to lean into the plot and my shed.

I did predict this would happen and it has moved quite a lot since the strapping was installed on the corner and the leaning wall has dragged this section along the damp proof course. 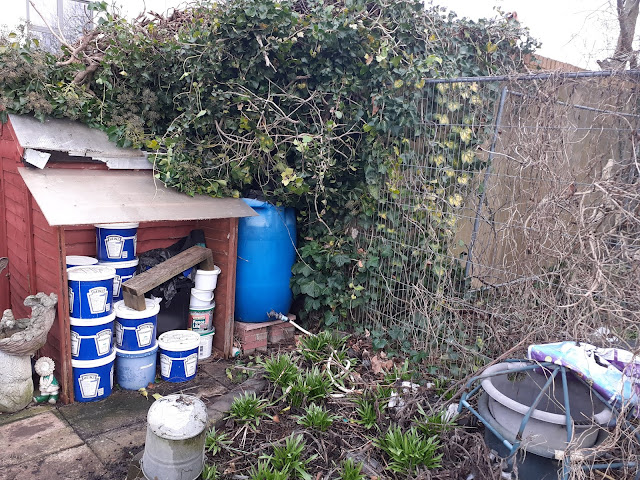 I was half way through clearing up the front and the right side of the shed as I thought the builders would be coming to drag the tree off my roof from the allotment side, when the Irish ganger came with Muhammad, site security and odd job man to look at what their operative had done.

They discussed trying to pull the stuff back over the wall and disappeared. Muhammad came back to say that the reason the guy didn't pull it back was because the wall moved and it was live and that their engineer thinks the wall needs rebuilding. It was if I had been transported back to 2013 and my original discussion with the Local Authority.

Now I'm hoping that this eastern european construction company that has an Irish groundworker employs some common sense and has an engineer that has impressed upon them that there is a difference between careful deconstruction and demolition.

If it was me I would remove the bolts from the wall behind my shed and push the leaning wall over into the area that has already been fenced off for the last six years. the top half of the flank wall behind the shed can then be pulled into their building site, and the bricks could be cleaned up and re used and the mortar is a sand lime mix and should clean up easily.

Let's hope they don't try that approach without removing the straps. 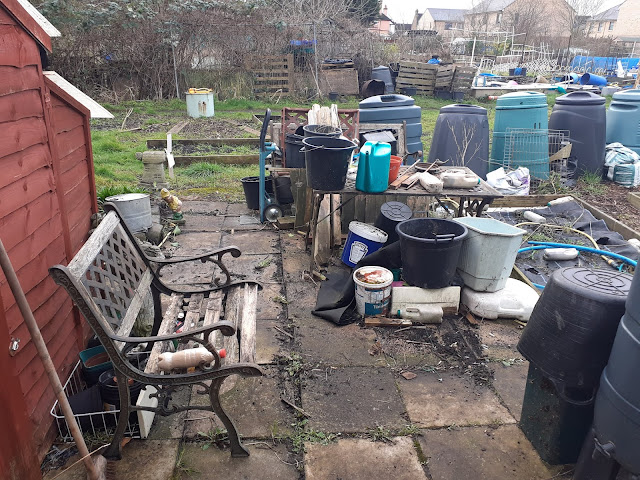 The area in front of the table needs clearing and the table turned 90 degrees. There are load of snails under the parasol base so a stinkle of blue pellets of death will be put down. The sweetcorn stalks from bed 7 also finally made it into a Dalek. 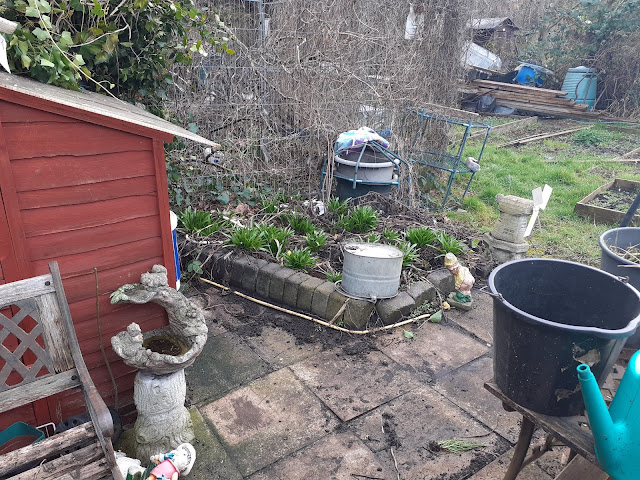 Glass Panels moved onto beds and off the fencing to the fall zone, the stacked sweet corn storks were all cut up and added to the Dalek and the mud and debris on the paving slabs swept up. The mud on here was scrapped up and I was hopeful it would dry so that could be  cleaned up more but it rained Friday night.

Daffs and Blue bells coming up in the comfrey bed.
Posted by cadalot at 18:00