Here is the state of play at the end of the first half day working the plot. Photograph taken from the South side of Plot 2 looking North

I've found lots of guttering, pots, broken tools and carpet under the weeds. Brambles are hiding what appears to be a pile of broken glass and there is a lot of debris under the broken water cistern. ﻿ 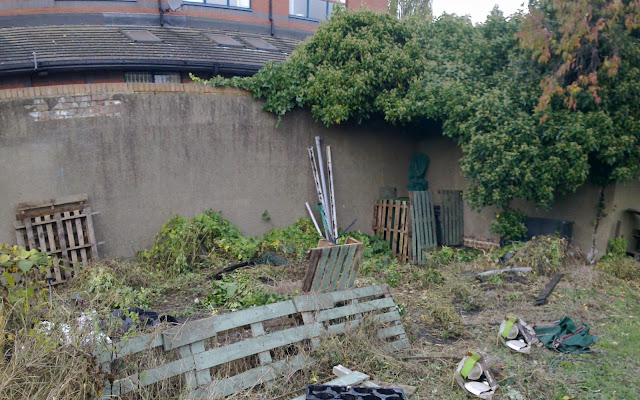 I have trimmed half of the ivy tree type structure that is overhanging the East wall and have found that I have a couple of gardeners friends "Robins" they have been busy popping in and out of the ivy and flying around me, as I uncover insects for them to eat.

I must do something about the water tank as because it's open it's only encouraging mosquitoes to breed and I've been bitten, there is plenty in the ground for the Robins without the mosquitoes.